Scheduled Exhibition The World of Chushingura – The Treasury of Loyal Retainers 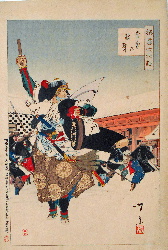 The Warring States Period was over, and people were enjoying the peaceful times of the Edo Period when a serious incident occurred. It began on April 21, 1701, when the lord of the Ako Clan, Asano Naganori (whose title was Takumi-no-Kami) injured the Kozuke-no-Suke, Kira Yoshinaka, with his sword in the Grand Corridor of Edo Castle. Shogun Tokugawa Tsuneyoshi was infuriated at Asano for drawing his long sword and striking Kira once on the forehead. Asano was forced to commit ritual suicide the same day, the Ako domain was confiscated, but there was no punishment for the injured Kozuke-no-Suke, Kira. Dissatisfied with the outcome, the samurai of the former Ako Clan, who had thereby become masterless samurai (roshi), plotted an attack on Kira to avenge their lord. On December 14, 1702 they raided Kira’s main compound in the pre-dawn hours, and fulfilled their cherished goal to avenge their lord’s death.
People around them praised this as model samurai behavior, but the 46 ronin who went against the decision of the shogunate by participating in the raid were forced to commit ritual suicide. The incident fanned the flames of popular sentiment for the underdog; the following year in January the play “Keisei Asama Soga,” a story of revenge, was performed at the Yamamura-za theater in Edo, and was followed by “Onikage Musashi Abumi” and “Goban Taiheiki and others” and other different variations on the theme, but the work that brought it all together was the August 1748 Joruri Puppet Theater performance of “Kanadehon Chushingura” at Osaka’s Takemoto-za Theater. That same title was even performed in the Kabuki Theater, further broadening its popularity. If a theater with poor attendance put on “Kanadehon Chushingura,” they could be assured of a full house, hence the work got the nickname dokujinto (grestorative bathh), and was presented by the Joruri Puppet Theater, Kabuki Theater, narrative storytellers, comic storytellers and others. It is repeatedly presented even today in television dramas, movies and the like.
Of course, many different actors are depicted performing in “Chushingura” in ukiyo-e works as well. In this exhibit we introduce the world of “Chushingura” as beloved by the people of Edo.