Scheduled Exhibition Ukiyo-e and the Vestiges of Edo 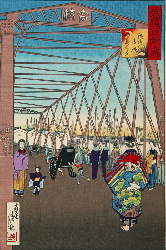 The Edo Period changed to the Meiji Period, Edo’s name changed to Tokyo, and a great deal of Western culture began flowing in. More and more huge ships from foreign countries appeared in Tokyo Bay seeking trade, and a variety of imported goods entered. Britain, France and Italy established naval bases in Yokohama (where the Minato-no-mieru-oka-koen Park is currently located), ready at any time to move on Tokyo. The cityscape of Tokyo also changed at a dizzying pace as bridges and buildings which used to be made of wood began to be made of stone, and transportation transitioned from palanquin to rickshaw, horse-drawn streetcar, and then steam locomotive. Men got haircuts, people in city were forbidden to wear swords as a result of the decree abolishing permission to carry swords, and people began wearing western-style clothing rather than traditional Japanese wear. For all of this, the people of Edo most lamented the rapid changes in the Tokyo landscape, as the number of western-style buildings increased, the number of traditional-style Japanese houses decreased, and business and commerce also went on to change.
In this exhibit, we introduce the culture of Edo which collapsed in a matter of a few years, and the culture of the Meiji Period.

A guided tour of the exhibit in Japanese (requires payment of the admission fee)
Saturday, May 28, 2016, beginning at 1:30 p.m.
Presented by our museum director