Autumn Special Exhibition Hiroshige and his Famous Places in Edo 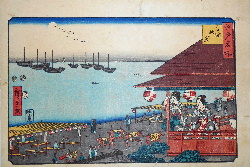 During the Year-end Holidays (December 25 - January 2),Mondays (except when Monday is a holiday)

Utagawa Hiroshige (1797-1858) is highly regarded today as a master of the landscape print, but before he got to know the world of landscape prints, he was producing works in a variety of other genres. In the Bunsei years (1818-30) he worked on actor prints, figure prints, and illustrations for woodblock-printed books, and was known as an “artist of pictures of young women.” However, around the late Bunsei era, influenced by the success of Katsushika Hokusai’s “Thirty-six Views of Mt. Fuji,” he moved on to landscapes. Hokusai thereafter produced landscape prints, building the foundation for the new genre of landscapes (famous places) that followed the genres of actor and figure prints. Hiroshige followed in Hokusai’s footsteps in the first year of the Tenpo period (1830-44), producing “Famous Places in the Eastern Capital” (commonly called the Ichiyusai version) to great acclaim. His “Fifty-three Stages of the Tokaido Highway” produced in 1833 (and commonly called the Hoeido version), became Hiroshige’s signature work. He later produced more famous scenes of Edo in his “Famous Places in the Eastern Capital” and “Famous Places in Edo” series. The “Comprehensive Ranking of Famous People” published in the Kanei years (1848-54) calls the three famous artists of the day “Portrait Toyokuni,” “Samurai Kuniyoshi” and “Famous Places Hiroshige,” further fixing Hiroshige’s position as the preeminent landscape print artist of the age. In his final years he was in the midst of producing his magnum opus, “One Hundred Famous Places of Edo” (118 prints in oban format), when he died.  May these works by Hiroshige transport you back 200 years to the time they were created, and turn you into an Edo-ite enjoying the famous sights of the eastern capital.

A guided tour of the exhibit in Japanese (requires payment of the above admission fee)
Saturday, November 28, 2015, beginning at 1:30 p.m. Presented by one of our curators.