Autumn Special Exhibition Kobayashi Kiyochika’s Death Centennial: The Spirit of the New Age, and The End of Ukiyo-e 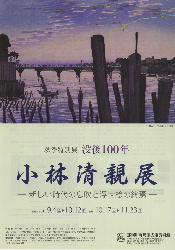 Kobayashi Kiyochika (1847-1915) is called “The Last Ukiyo-e Artist.” He was the artist who offered the last rays of hope to the ukiyo-e art world which was being besieged by the waves of westernization.
Kiyochika was born into the household of the chief of shipment unloading at a daimyofs storehouse in Tokyo during the last days of the Tokugawa government. When his father died, he took over as head of the household, but in the tumult of the Meiji Restoration he lost his job and his social standing, and turned to the world of ukiyo-e art when the Meiji Period began.
At the beginning of the Meiji Period, driven by westernization, the drastically transforming landscape of Tokyo was drawn with bright reds, blues and other colors handed down from the traditional pallet, in ukiyo-e called “kaika-e” (enlightenment pictures), which were published in quick succession. Kiyochika’s debut work, published in January of 1876, was one of these kaika-e.
@However, seven months later, Kiyochika introduced unique works which differed from the ukiyo-e up until that time. He paid attention to “light and shadow”-the subtly changing rays of sunlight, the faint gleam of a lantern on a moonless night, the warm glow of a gas lamp, incorporating western shadow methods into his depictions. This new genre of ukiyo-e came to be called “kosen-ga” (light ray pictures), and attracted people’s attention.
Between the years of 1876 and 1881 he produced more than 90 kosen-ga works for a series entitled “Famous Places in Tokyo.“ In addition to landscapes people were familiar with from the past, he also depicted scenes of a newly changing Tokyo. However, Kiyochika didn’t stop there, afterwards working in a variety of genres, including flower and bird prints, richly satirical cartoon caricatures, figure prints, war prints, and paintings.
The Nakagawa-machi Bato Hiroshige Museum of Art is proud to display its Kiyochika collection together in a single exhibition, and trace Kobayashi Kiyochika’s work as an artist. Through his many diverse and varied works, we hope you’ll get a sense of the spirit of the new age, and what was on Kiyochika’s mind as he lived through the dizzying changes