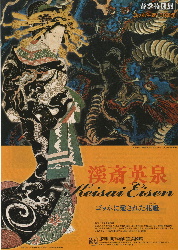 The artist Keisai Eisen (1791-1848) was active in the last days of the Tokugawa Shogunate when Edo culture reached the peak of its maturity.

Eisen, who made the figure print his specialty, at first modeled himself after his master, Kikukawa Eizan, by depicting the ephemeral woman. However, he afterwards established his own figure print style, which has been referred to as being decadently voluptuous. Those distinctive female figures garnered great favor with the people of the time, and he became the leading figure print artist of the mid-Bunsei (1819-30) era.

Post-impressionist artist Vincent Van Gogh (1853-1890) was one of the people enchanted by Eisen’s figure prints. When he saw Eisen’s Courtesan in a Dragon and Cloud Uchikake Robe adorning the cover of the journal “Paris Illustre,” Van Gogh was greatly impressed, and repeatedly reproduced the figure of the courtesan in oil paintings.

We are displaying the print that mesmerized Van Gogh, Courtesan in a Dragon and Cloud Uchikake Robe, the journal, figure prints, paintings, prints of warriors and military subjects, and illustrated books - approximately 150 items split between the first and second halves of this exhibition. Please enjoy the glamorous and powerful works by Eisen that were cause by his stormy life and the social conditions at the end of the Tokugawa Shogunate.

The Chiba City Museum of Art