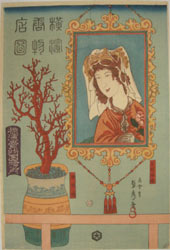 Kunisada Utagawa 'the Coral Formation; Impotation Shop in Yokohama from Series of commodities in Yokohama'

Adults 500 (450) yen; High School, College Students: 300 (270) yen; Elementary, Junior High School Students: 100 (90) yen * Fees in parentheses are group rates for 20 or more visitors * Free admission for visitors aged over 70 years and preschoolers * Half price for visitors with the physical disability certificate, and for one accompanying caregiver

In 1858, the ‘Black Ships’ of the U.S.A commanded by Perry had Japan repeal their isolationism, though Japan had forbidden foreign ships to enter by the isolation policy since the beginning of 17th century. Tokugawa shogunate opened 5 ports to the foreign nations, such as the U.K, France, Dutch, Russia as well as the U.S.A.

After the overthrowing the Shogunate, many traders or governors from abroad came to Japan during the Meiji Restration. Especially Yokohama port near from Tokyo became the base of people from abroad, and ukiyo-e artists produced their Western culture and won popularity. Those Japanese had never seen before such as carriages, steamships, Western people or things became the subjects of ukiyo-e. These ukiyo-e was called ‘Yokohama-e’ to tell from other ukiyo-e.

Gradually ‘ukiyo-e’ was taken its position by ‘lithograph’ or ‘photograph’ though it had still been up-to-date in the period when yokohama-e was popular. This exhibition shows yokohama-e by ukiyo-e artists who played an active part in the Meiji period. Certainly it is the opportunity to compare Japanese culture with the Western one.