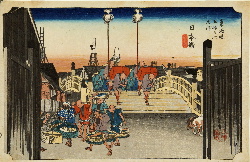 Adults: 500 (450) yen; High School, College Students: 300 (270) yen Elementary, Junior High School Students: 100 (90) yen * Fees in parentheses are group rates for 20 or more patrons * Free admission for patrons aged 70 years and over, and preschoolers * Half-price for patrons with accessibility and special needs, and for one accompanying caregiver

Utagawa Hiroshige (1797-1858) produced more than twenty series in a forty-year period featuring sights along the Tokaido Highway. We introduce works from two periods of his life. The first came out of his aggressive, overflowing-with-ambition early years: The Fifty-Three Stations of Tokaido Series (commonly known as the Tokaido Highway Hoeido Edition). The second, The Fifty-Three Famous Sights Series (commonly known as Tate-e Tokaido), produced with the skill of a seasoned master, came towards the end of his career after he obtained success as an ukiyo-e artist.

Hiroshige first took on the Tokaido series project circa 1833 at the age of thirty-seven. This Fifty-Three Stations of Tokaido Series attracted more public attention than any other by artists who had previously produced Tokaido art. His artwork depicts center-stage travelers on the Tokaido in such a way that the person looking at the artwork becomes one journeying along in the picture. With this project, Hiroshige paved the way for ukiyo-e famous places artists.

The second set of works was produced in 1855 at the age of fifty-nine. It is called The Fifty-Three Famous Sights Series and came twenty-two years after the Tokaido Hoeido Edition. For Hiroshige, this was his final series on the Tokaido Highway. A unique feature to this project is the realistic depiction of placid scenes encompassing the entire landscape from near to far, composed with a sort of aerial view.

This exhibit endeavors to contrast a series from Hiroshige’s early career and one from the concluding years of his life. We welcome you to discover the evolution of Hiroshige’s art skill and techniques.