Scheduled Exhibition Hiroshige and the Two “36 Views of Mt. Fuji” 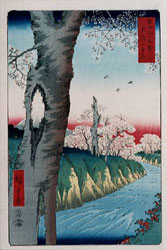 Mondays, and the day following a holiday (except when this falls on a Saturday or Sunday)

As it could be seen from the area that is called Edo, Mt. Fuji was beloved by the common folk of Edo. In the Edo Period, a religion was developed about Mt. Fuji; mounds in honor of Mt. Fuji were built in various places throughout Edo, so that it was called " the religion of 808 Edo towns". In addition, many ukiyo-e artists drew works with Mt. Fuji as the theme. In particular, Katsushika Hokusai's "36 Views of Mt. Fuji" played a big role is the establishment of the landscape print genre among ukiyo-e art circles.
Following Hokusai, Utagawa Hiroshige also drew a work with Mt. Fuji as the subject, but he is known for two works, the "36 Views of Mt. Fuji" series he drew when he was 56 years old ( in 1852 ), and the "36 Views of Mt. Fuji" posthumously published in 1858. Both works depicted the same theme. However, adding changes in the places they drew, the seasons, and the weather to the different periods they were created, the differing size of the woodblocks, and the differences between vertical and horizontal composition led to final products whose works each have their own appeal.
In this exhibit, we present the two series of Mt. Fuji which Hiroshige drew, between which six years had passed. We hope you will appreciate Hiroshige's innovations in both works.